You are here: Home / Car Security / How to Protect Your Car from Auto Theft 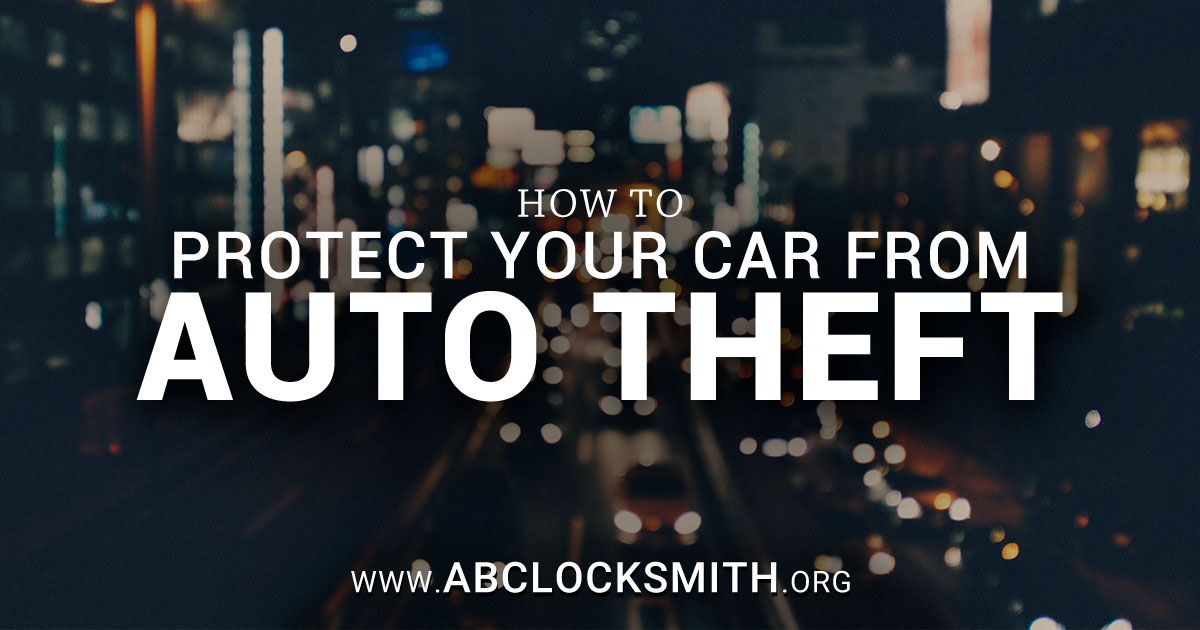 Today’s vehicles come equipped with all the bells and whistles, from remote keyless entry to sophisticated alarm systems. Despite these advances in technology, auto theft remains a problem. According to the FBI, 707,751 cars were stolen in 2015. This is an estimated worth of $4.9 billion!

Auto theft encompasses a range of potential crimes. For example, criminals can sell components such as wheels and airbags on a black market. The FBI estimates that there were over 75,000 airbags stolen in 2015 alone. Fortunately, there are steps we can all take to protect against auto theft.

Is Your Car a Target?

Because of advances in security technology, older cars are more often a target for thieves. According to the National Insurance Crimes Bureau, 7 out of 10 cars stolen in 2015, the last year the organization collected data, were made prior to 2000. There are a couple of reasons for this.

First, they’re easier to steal. Second, they have rarer parts, which can fetch a higher profit at chop shops. Hondas are stolen most often because cars manufactured in the 90s all have similar ignitions, which makes it easier for thieves to make “master keys” that fit a variety of models.

There are several preventive ways to protect against car theft. Some common sense examples include:

Keep your vehicle locked at all times, especially when your car is running. Even if you’re just running into picking up a pizza, lock-up and bring your keys with you.

If traveling to a new destination, know where the bad neighborhoods are and take an alternate route, if possible. If traveling at night, park in a well-lit area. Thieves are more likely to work in the dark. Always be aware of your surroundings. If you’re parked on the street or on an incline, turn your wheels toward the curb so it’s harder to tow away.

Never store your vehicle’s title in the car. Car thieves have been known to get away from police because they can produce the vehicle title and registration. As an additional precaution, have your Vehicle Identification Number (VIN) etched into every one of your windows. This will force a would-be car thief to replace all of your windows before they can sell it. As this would take a chunk out of their profits, they would be more likely to pass over your vehicle.

If you drive an older vehicle without a security system, consider installing one. There are several types of systems in a variety of price ranges. A simple, effective security system is the so-called “boot,” or a mechanism that locks onto your steering wheel. Ignition cut-off systems are more effective and can prevent a thief from starting your car. You can even install a security system that sends a signal to police when it’s stolen.

Your car’s security system will depend on your budget and your car’s value. It doesn’t make much sense, for example, to install a sophisticated security system that equals the value of your vehicle.

The majority of car thieves are “professionals.” In other words, they make a living off of lifting cars and selling them to chop shops. These thieves look for either high-performance cars or vehicles with parts that are easily interchangeable.

The other main type of car criminal is a joy rider, who seeks out luxury or high-performance vehicles. You’re more likely to recover your car, but it will likely suffer significant damage.

Finally, there are ‘bump and rob’ carjackers, who will rear-end you and steal your vehicle when you get out to look at the damage. If you’re rear-ended in a bad or unpopulated area, stay in your vehicle and notify the police or drive to a more populated area.

Remember, cars can be replaced. If you’re carjacked, give it up without a fight. Nothing is more important than your safety.